After having done our novice mountain bike camp two weeks ago I felt like I was a little better prepared with all the stuff I had to bring.  Before I had a baby I kind of laughed at all those parents that felt like they needed all these different baby items.  But now that I’m a parent I totally understand.   I DO need all that baby stuff; pack-n-play, jungle gym, Johnny jump-up, stroller, high chair, toys, clothes, bath supplies, stuffed animals, noise maker, hiking gear etc.  To say that my Subaru Outback was bursting at the seams was an understatement!

Mom took care of Emmett for the week while I ran our advanced skills camp.  We had nine participants. Two of the riders came to this camp three years ago.  It was great to have them back.  And one of my young mountain bike athletes from Breckenridge also came.  We stayed in the Rim Village condos with everyone getting their own room to spread out.  And like the first camp, we worked with Rim Tours again.  Our guide was Sylvie, an amazing woman and phenomenal mountain biker.  I think she ended up having more fun than any of us!

Everyone arrived Tuesday afternoon to warm sunny skies and a weather forecast that was about as perfect as you get in Moab; mid eighties, clear skies and no wind.  Yeah!  After a casual afternoon of socializing, wine, and appetizers, we had a big dinner of grilled chicken, veggie pasta and a big salad.  I took the group through the week’s schedule before sending everyone off to bed.

Our first morning was spent at City Park reviewing the basic fundamentals and core concepts of mountain biking.  Having an advanced group meant we were able to move a little faster and cover more skills.  By noon everyone was mentally exhausted.  Lunch took care of that!  My mom brought Emmett to City Park so I could feed him before heading out on the trails.

After loading up the van we drove north of town to the Bar M singletrack.  This area has been extensively developed in the past two years, with some great new singletrack.  We rode a trail called Deadman’s.  It was a good solid intermediate trail with a little of everything, including switchbacks.  A good introduction to Moab riding.  Even though we didn’t ride very far we spent a lot of quality time working on skills, and taking lots of pictures.

Once we returned to the condos, each guest, including my mom, was treated to a relaxing massage and then late afternoon appetizers.  Dinner was a yummy Dutch Oven lasagna with chocolate brownies for dessert.  Definitely not a week to try and lose weight.  One of the Rim Tours mechanics came out after dinner and gave an extensive bike maintenance talk.  By the end, half our group was nodding off.  Time for bed!!

Our second day started at City Park, with a quick review of the skills we covered yesterday before moving on to the more advanced techniques needed for the bigger rides in Moab.  It was fun watching the participants ride up and down ledges that only yesterday they said “No way!” when I showed them what was in store.  After three hours of mental gymnastics we enjoyed a tasty lunch with Emmett and my mom.

Then it was up to the Slickrock Trail.  We split the group in two and went in opposite directions on the Practice Loop.  The name is very misleading.  The Practice Loop isn’t any easier than the main trail; it’s just a lot shorter.  Everyone got to practice the techniques for super steep climbs and descents.  Because the trail is almost entirely on rock you get amazing traction and can ride up and down stuff you would never otherwise consider.  By 3:30pm we were done and it was back to the condos for massage, appetizers, and a dip in the pool.

Dinner was grilled salmon, pasta, veggie kabobs, and a huge salad.  Plus a delicious dessert of homemade lemon cookies courtesy of Kirstin, co-owner of Rim Tours.  Tonight was movie night!  I showed everyone the “Off Road to Athens” movie to give them a better perspective on what I used to do for a living.

Thursday was our first full today of riding and a chance to really fine tune the skills we had worked on all week.  We took our group to a ride called Blue Buffalo.  It’s a great ride to work on slickrock skills; riding up and down steep ramps and learning how to launch off ledges of all sizes.  There was something for everyone.  And we had lots of sunshine and no wind.  Lunch was at Uranium Arch just below the Seven Mile Rim.  By the end of the day everyone was mentally and physically exhausted.  We stopped ½ mile from the van and scrambled up the slickrock to a beautiful petroglyph and pictograph panel high above the valley floor.  Years ago there was a blue buffalo painted on the rock, also known as a pictograph and also the name of our ride.  Unfortunately vandals destroyed the painting and you can only see a very faint outline of where the buffalo used to be.  Many of the other petroglyphs were still in good condition and made for some great pictures.

Another afternoon of much needed massage and rest.  We always have a special “dress-up” night for our last dinner of the camp.  After eating way too much food we all hung out, drank more wine, watched videos from the week and had a lot of laughs.  Hard to believe this was the last night of the camp.

Saturday was the grand finale of the camp.  We shuttled up to the Kokopelli start of the Upper and Lower Porcupine Singletrack.  This has become one of the best rides in the Moab area, and it was a perfect ride to end the camp.  It starts up in the La Sals at almost 8000 feet and then descends back down to Moab at 4500 feet.  Much of the trail follows the edge of Porcupine Rim, giving everyone incredible views of Castle Valley and Castleton Tower.  Of course nothing is every truly downhill.  There are a few leg burning climbs on this ride making you appreciate the downhill that much more.

Lucky for us, my husband Greg joined us for the day.  He drove out to Moab late Thursday after work, mostly to see Emmett, but also to help me out with this ride.   His dry sense of humor was a big hit with the campers and kept us entertained all day.  And after six plus hours, numerous flat tires, a broken cleat, and a few mechanicals, we made it down with everyone intact, grinning from ear to ear.  Whew!  I’ve done this ride at least 50 times and it is still my favorite!

After returning to the condos we unpacked the van, loaded up the cars, took a few last pictures, and said goodbye.  The end of camp is always bittersweet.  I am relieved to finish, but I also feel like I’m saying goodbye to my best friends.  It was a big success and I can’t wait to go back in October and do it all again.

Have a great summer and maybe we’ll see you this fall in Moab! 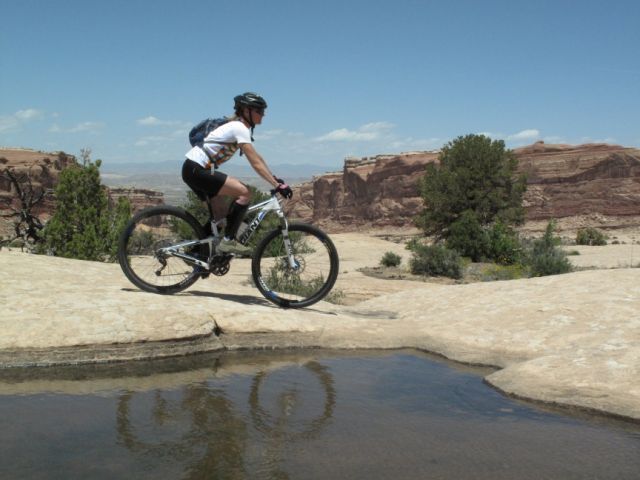