Hard to believe another Moab camp has come and gone; and it was the third one of the season!  The summer has just flown by and Emmett is now crawling everywhere and into everything.  My dad and his wife Connie came with me this time to babysit Emmett.  My Subaru Outback was once again bursting at the seams.  For this trip I borrowed a huge oversized Yakima rocket box.  Held a lot more stuff, but because there were three adults and one small child we brought a lot more stuff.  Somehow it all fit and we made it in one piece.

The drive out was gorgeous!  This has been one of the best seasons for aspen in a long time.  My dad came down with the flu the day before we left so he decided to wait a few days before coming to Moab.  So it was Connie, Emmett and me driving to Moab.  One of our many stops was in Vail to do a short hike and enjoy the wonderful colors.  It was warm and sunny and a nice break to the monotony of driving.

After almost a twelve hour day we made it to Moab.  We stayed at Rim Village condos again on the south end of town.  We were able to check in two nights early which made life a thousand times easier.  Having Emmett makes “crashing at a friend’s house” a thing of the past.  The two nights before the camp starts I usually stay with my dear friend Cathy Mattingly.  But with 3 ½ of us there wasn’t the room.  Luckily it worked out to stay in the condos.

On Monday I spent a good portion of the day getting stuff ready for the camp.  I was able to ride late in the afternoon with my good friend Jim Rutkowski.  He was here for our camp for the seventh time.  And he came a few days early so we were able to hook up for a ride before the other participants arrived.     It was almost 80 degrees out!  Gorgeous day.

On Tuesday the weather changed and became cold and cloudy.  Our guests arrived in the late afternoon to an ominous weekly forecast.  Darn!  We got to know each other with yummy appetizers, red wine, and a delicious dinner.  After dinner I went through the schedule and the details for the week and then sent everyone off to bed.

Our first morning was spent at City Park doing skills and drills.  It’s a great way to get people loosened up and relaxed.  Moab can be so intimidating that it’s hard to ride technical trails first thing.  We covered everything from basic balance and position on the bike to cornering and switchbacks.  It also gave me a chance to assess everyone’s skill level.  After a quick three hours it was time for lunch.

We had lunch at the park and then loaded up the vans and drove out to the Bar M trailhead north of town.  This area has been extensively developed in the past two years, with some great new singletrack trails.  We rode a trail called Deadman’s.  It was a good solid intermediate trail with a little of everything, including switchbacks.  A good introduction to Moab riding.  Even though we didn’t ride very far we spent a lot of quality time working on skills, and taking lots of pictures of course.

Back at the condos the campers were treated to relaxing massages and then late afternoon appetizers.  Dinner was a Dutch Oven lasagna with chocolate brownies for dessert.  It’s a good thing we’re out riding our bikes all day!  Bobby, our Rim Tours guide did a great bike maintenance talk after dinner.  Then it was off to bed.

Thursday was another cold gray day.  The sun peaked out a couple of times but the wind kept everything fairly chilly.  We started the day with a skills and drills session at City Park.  Today we worked on the front wheel lift and riding up and down ledges.  In just one day I could see big improvements from everyone.  We had lunch in the park before loading up and heading up to the Slick Rock Trail.

After unloading all the bikes a fast moving squall blew through, dumping heavy rain and hail for about ten minutes.  Our timing was very fortuitous in that we hadn’t started our ride yet when the front moved through.  We all piled into the van and waited for things to clear.  They did and we were soon our bikes.  The nice thing about the Slick Rock trail is that it is one of the best places to ride in the rain.  It should really be called “Sticky Rock” because of the amazing traction.  Any of the sections that weren’t on rock were in deep sand, which actually got much easier after the rain.

We split into two groups and did the Practice Loop.  At one point we took shelter under a ledge as another storm blew through.  Not a great day for the weather but everyone still learned a lot and had fun on their bikes.  At 3:30pm we loaded the van and drove back to the condo for massages and a little relaxation.  Dinner was a delicious Mexican pile-up.  After we ate I gave a power point presentation on racing, training, and nutrition.  I borrowed a projector from a friend of mine and showed it up on the wall.  Made it easy for everyone to see.

Thursday was our first full today of riding and a chance to really fine tune the skills we had worked on all week.  It was also the first day of sunshine we had since the camp started.  Yippee!  We took our group to a ride called Blue Buffalo.  It’s a great ride to work on slickrock skills; riding up and down steep ramps and learning how to launch off ledges of all sizes.  There was something for everyone.  And we had lots of sunshine and no wind.  Lunch was at Uranium Arch just below the Seven Mile Rim.  By the end of the day everyone was mentally and physically exhausted.  We stopped ½ mile from the van and scrambled up the slickrock to a beautiful petroglyph and pictograph panel high above the valley floor.  Years ago there was a blue buffalo painted on the rock, also known as a pictograph and also the name of our ride.  Unfortunately vandals destroyed the painting and you can only see a very faint outline of where the buffalo used to be.  Many of the other petroglyphs were still in good condition and made for some great pictures.

After another relaxing afternoon of massages, pool time, and a nap.  Tonight’s dinner was “dress-up” night.  It was fun to put on something other than sweats and a t-shirt.  Being our last night we didn’t have an evening presentation.  Everyone hung out and shared pictures, phone numbers and emails.  Then it was off to bed.

Saturday morning we woke to rain and low dark clouds.  After yesterday we were certain all the bad weather had moved on.  Unfortunately it snowed overnight in the La Sals making it impossible to do the planned shuttle ride up to Hazard County.  After consulting with Kirstin, the co-owner of Rim Tours, we changed plans and drove up towards Island in the Sky to do a ride called The Magnificent Seven.  This is fairly new singletrack that just recently became a legal trail.  It was the perfect ride to end with.  Starting up in Island in the Sky meant that most of the ride trended downhill.  There were still a few bumps and one long uphill climb at the very end, but otherwise it was fast fun singletrack.

Eventually the trail joined Gold Bar Rim and started to climb.  This portion of the trail became more technical and definitely more challenging for the lungs.  I enjoyed getting my heart rate up!  Great views and to our surprise the weather cleared and we got a nice afternoon of sunshine.  Finally!  The ride back out to the cars was long and tiring, mostly because there was a painful 20 minute climb in the last hour of the ride.  Ugh!

Finally back to the van we celebrated a successful four days of riding by enjoying a bag of potato chips!  Boy does salt taste good!  Back at the condos everyone packed up their stuff and said their goodbyes.  Sad to see everyone go!  The five days always goes so fast.  Luckily I had our staff condo for one more night so we didn’t have to pack up until Sunday morning.  I took my dad and Connie out for a delicious dinner of Thai food to thank them for all their help.  It’s not easy taking care of Emmett for five days straight.  I spent the night packing and answering a few emails.  I also came down with a head cold yesterday and was pretty miserable for most of the da.  Yucht!  Glad the camp is over because I’m exhausted!

The drive back was long and slow, mostly because we have to stop a lot for Emmett.  My dad and Connie took Emmett in their car so I could make phone calls to my athletes and get caught up.  Emmett held up really well and didn’t get fussy until the last 45 minutes of the drive.  Not bad for an eleven month old!

This summer was the best season for our Moab camps in three years (when the economy tanked).  We filled three camps; two in May and the one in October.  They are a lot of work but I get to meet such great people.  And it was also fun for Emmett to spend so much time with his grandparents.

And we’ve already got our dates for next year!

Thanks for a wonderful week and I hope to see you back next year! 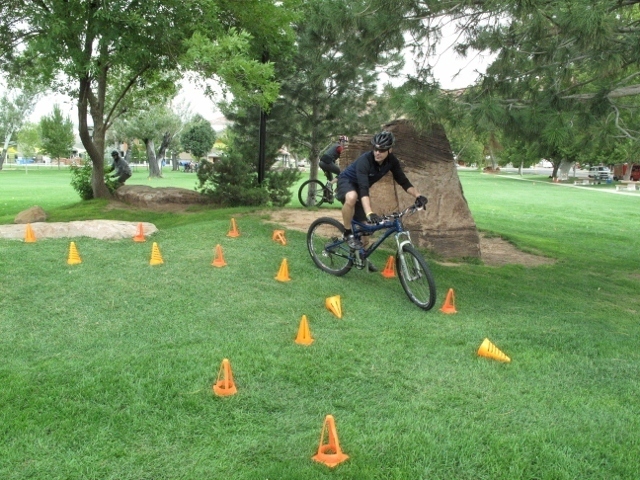