Every winter my husband and I participate in a number of hut trips in the mountains of Colorado.  “Huts” are elaborate log cabins, built and maintained by the 10th Mountain Hut Association of Colorado.  The huts sleep anywhere from 6-16 people.  The only thing we had to bring was clothing, sleeping bags, and food.  The kitchens are fully stocked with cookware, propane burners for cooking, and two wood burning stoves.  One is situated in the common area and has a large metal pot for melting snow.  The other is situated in the kitchen and is actually an old fashioned stove/oven.  In most of the huts the upstairs is the sleeping area.  There are platforms with mattresses and even pillows.  It is quite the set up.

This past weekend we joined seven other cycling friends of ours and ventured to Margy’s Hut outside of Aspen, CO.  Heather Irmiger, Jeremy Horgan Kobelski, Kelli Emmett, Frank Maple, Whit Johnson, Pete Webber, Marc Gullickson, my husband Greg, and myself left the parking lot around 10am on Wednesday morning.  With so much lung power, we reached the hut, 6.5 miles and 3 1/2hrs later.  Ouch!  And that was after gaining 2600 ft, ending at 11,400ft.  Double ouch.

After a quick lunch, we loaded up our day packs with shovel, probe, avalanche beacon, more food and water, and the first aid kit, and headed out for a few quick runs before dark.  Nothing like maximizing the amount of calories burned in a day.

Backcountry skiing is a unique blend of EXTREME physical exertion going uphill, and then unbelievable pristine powder with incredible views on the way down. This winter the snowpack in the central Colorado Mountains has been thin and unpredictable, thanks to El Nino.  While we had plenty of fresh powder, there was no substantive base underneath.  That meant that at any time you could be skiing along and then the snow underneath would collapse, dropping you into deep sugar snow.  On the mellow slopes that wasn’t too much of a problem.  On the steeper slopes, “punching through” often resulted in going over the handlebars, a cycling term used when one flies over the front of the bike, often landing face first on the ground.  Crashes on skis of this manner are usually spectacular, but landing in so much soft powder keeps the injuries to a minimum.  Mostly it is a bruised ego.

We skied until dark, literally, and returned to the hut starving and exhausted.  And this was only day one.  One of the best parts about a hut trip is all the yummy food you get to eat.  We probably burned upwards of 4000 calories today, so that meant a BIG dinner.  We usually do group dinners; everyone helps cook and we all eat together.  And of course there is the alcohol and the amazing combinations people come up with using snow and ice.

Thursday was a marathon day of skinning and skiing, non-stop for almost eight hours.  We didn’t even take a break for lunch; everyone ate quick snacks on the uphill hikes.  No one wants to slow the group down.  And everyone wants to be the first one down the next slope of untracked powder.  The great part about Margy’s Hut, is the skiing is very safe.  With the typical unstable Colorado snow pack, we skied slopes between 22-30 degrees with low avalanche danger.  No one wants to push the envelope when the consequences are so severe.

Jeremy Horgan Kobelski is a backcountry animal.  He broke trail for us most of the day, and was the last one to head back to the hut in the late afternoon.  Eventually the sun set and it was time to head back.  I had nothing left in the tank.  Another 4000 calorie day.  Time to eat!  Everyone was pretty spent and it took a while before we could muster up enough energy to cook dinner.  And bed came early for most of us.  What a huge day.

Our last day was much the same; a few hours of crazy hard skiing in the morning, a quick lunch, and then the ski out with our fully loaded packs, back to the cars.  And then the long four hour drive back to Colorado Springs.  I don’t think we’ve ever done a hut trip where we sit around, drink hot spiced wine, and enjoy the comforts of the hut while reading a book.  It is always a marathon, aerobic, never ending, lung busting, calorie burning adventure.  I wouldn’t have it any other way!

And next month we do it all again at the Eiseman Hut outside of Vail, CO.  Stay tuned for the next oxygen deprived ski trip. 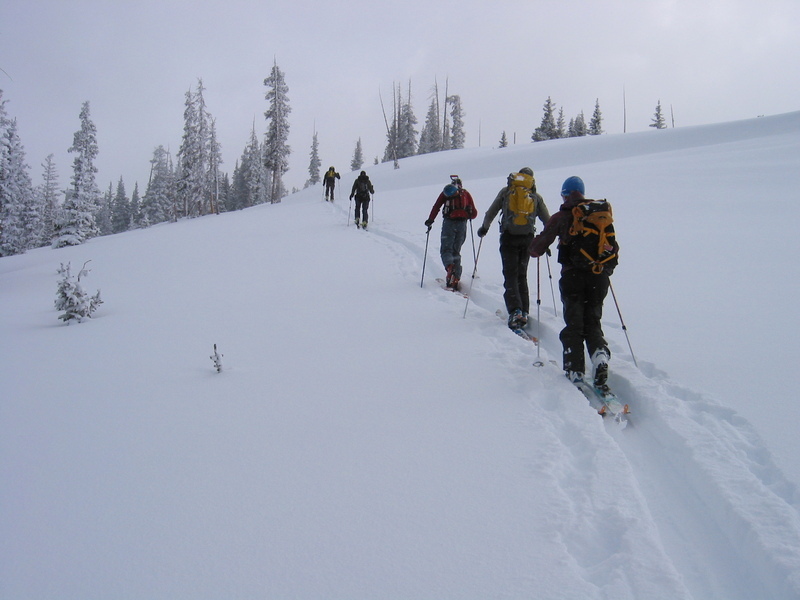