This was the day I had been looking forward to since the route was announced in Feb.  I have done portions of this ride, but never the whole thing.  I also figured it was going to be one of the hardest days of the Tour.  We got up at 5am again and this time we left by 6:20am.  Breakfast was pretty minimal so we didn’t have to spend a lot of time waiting in line to eat.  The winds had blown all night, bringing in lots of warm air, which made our early start not so bad.  It also gave us a headwind the ENTIRE day!

We immediately started climbing up Red Mountain Pass, the first big “hill” of the day at 13 miles long.  Red Mountain is a spectacular pass with incredible views, narrow roads, and lots of exposure.  Made for some great pictures!  With very little traffic at 7am it was a very enjoyable climb.  At mile 8 we had our first aid station.  It was time for pancakes!  Every day on Ride the Rockies the “all you can eat pancakes” vendor was at the first aid station.  And boy were they yummy.  I think I had ten today!  We all regrouped at the top of Red Mountain Pass, filled our water bottles, and headed down the hill to Silverton.  What an amazing descent!!  Dad decided to take the sag wagon to the top of the next pass.  Carrie wanted to get her heart rate up so she rode ahead, and I told Marge I’d meet her at the top.  Molas Pass was the next big climb at 6 miles long.  The traffic was terrible.  Lots of big motor homes with tourists wondering what the hell all these bikers were doing on their roads.  Because of the sheer numbers of riders, the traffic was forced to go slow so I never felt in danger.  It just got annoying.

Most of the food vendors were waiting for the riders at the top of Molas Pass.  Despite the chilly wind we hung out on top for a good 30 minutes, eating crepes and drinking Gatorade.  Dad got back on his bike and rode with Carrie down the pass.  I waited for Marge and then came down with her.  It was a great descent but not nearly long enough.

Then it was up the third big climb of the day, Coal Bank Pass.  This was the shortest at 4 miles, but seemed tough because we had already been riding for over four hours at this point.  More food at the summit and then a high speed descent back down the valley.  Once in the valley the road opened up into a four lane highway.  We had a large shoulder and a miserable head wind to deal with.  The road was flat with some long uphill sections that seemed to take forever.  Marge sat on my wheel the entire way, which meant I got no relief from the wind.  That took its toll and by the last aid station I was cooked.  We still had another hour of flat highway into Durango.  The temps were in the high 80’s.  I knew that if I kept going I would push my body too far so I opted for the sag wagon.  If I hadn’t been pregnant I would have gone on, but now I had a great excuse!  Marge, the bad ass that she is, continued on alone for the last miserable hour of riding into Durango.  I sat in a nice air conditioned van and answered a few emails on my phone.  What a relief to be off my bike!  Impressively enough, my dad also rode all the way into town from Molas Pass.  Carrie gave him a nice draft until the last aid station and then she decided to take off and ride hard the last hour to Durango.  So Dad rode alone as well.

By the time we all found each other in Durango on the campus of Mesa State College we were exhausted.  It had been another nine hour day!  Today also happened to be my official presentation to Ride the Rockies so after getting my tent partially set up and doing a quick change of clothes, I had to hustle off to the Student Union to give my speech.  Not exactly what I wanted to do so soon after finishing but oh well.

My presentation was on the Women’s Tour de France.  There was a small but attentive group of riders in the audience.  I think most people were collapsed in bed after such a hard day.  After my talk we went straight to dinner, which was easy because it was right below us in the cafeteria.  We definitely took advantage of the “all you can eat” sign at the entrance.  After dinner I took a short bus ride into town to buy some Comfrey salve for my very raw bum.  When I got back it was 9pm and time for bed.  Yippee!  What a day! 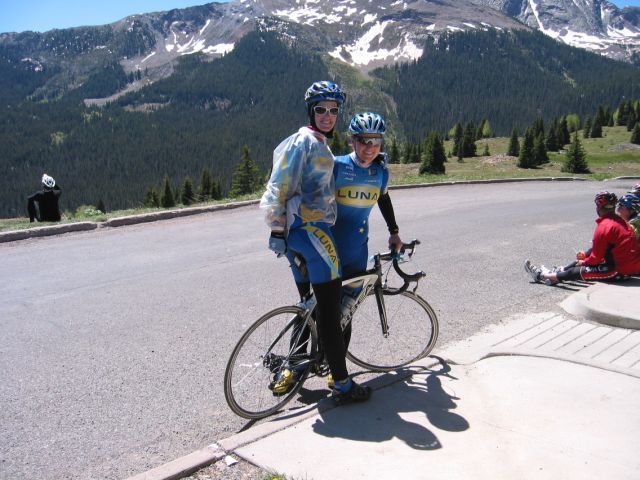