Even though today’s route looked relatively easy on paper, it was still 87 miles long with one pass to climb towards the end of the day.  The road north from Alamosa is called the “Gun Barrel”.  It is dead flat and straight without a single turn for over 45 miles.  On both sides off in the distance are big mountains, but the valley itself is quite boring.  Carrie didn’t want to ride my slow pace so she took off and we only saw her at the aid stations.  I sat in front and gave Marge and my Dad a draft the entire way.  Luckily we had a tailwind that grew in intensity as the morning turned to afternoon.  There were moments when I felt like I could fall asleep on my bike.  No one was talking and I wasn’t getting any stimulation from the scenery.  I had some caffeinated Shot Blocks at one of the aid stations and that helped give me a boost.  After three plus hours we finally started the gradual ascent of Poncha Pass.  This was the easiest pass of the entire week at only 3 miles long.  And with our huge tailwind we literally got blown up the hill.

The aid station at the top was full of celebrating cyclists.  Last climb of Ride the Rockies.  Yippie! The sun was out and everyone was enjoying the food and music at the summit.  We all rode down the pass together and came into Salida four abreast across the finish line.  Oh joyous celebration!  The final festivities were in a nice grassy park with big shade trees.  The local Thai restaurant was selling curry and Pad Thai so of course that’s where we had lunch.  There was a pretty good band playing so we relaxed in the shade eating and listening.  Feels so good to be done!

We found our bags one last time and took a quick shower in the shower truck before heading home.  My husband Greg was going to pick me up so everyone else left in my dad’s car.  I hung out in the shade for another hour before my husband arrived.  He and I grabbed a pizza downtown before the long drive home.

I am definitely tired but with a big smile on my face.  I feel so lucky to have gotten to ride across Colorado for seven days with my dad and sister.  Considering my sister has two little kids and I’ve got one on the way, this was a very special week.  Hopefully next year I can talk my husband into going and we can bring the baby and our own car and recruit Grandma for babysitting.   I’ll keep my fingers crossed! 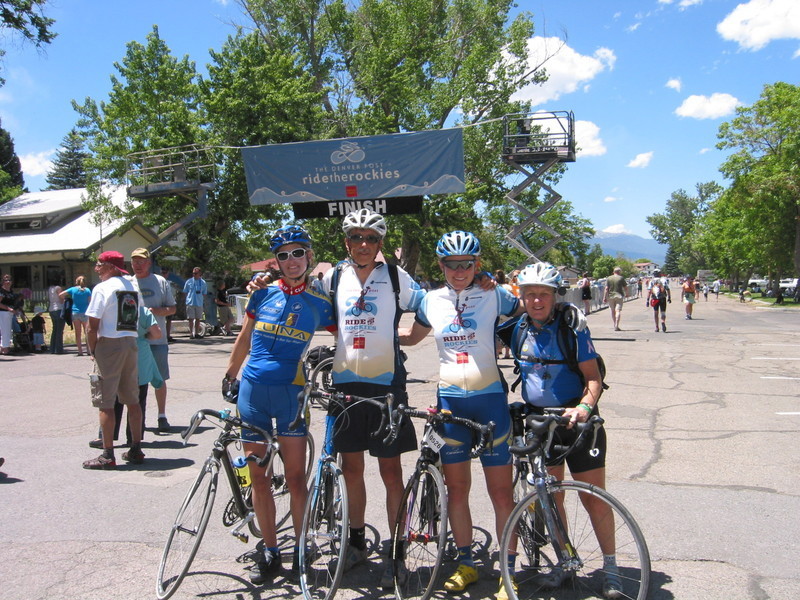